LUBUMBASHI, DRC – Up to 33 people are feared dead and an unknown number of people seriously injured in the Democratic Republic of Congo after a freight hazchem train derailed on Sunday, the UN’s radio Okapi has reported.

The train, which was running between the country’s second city of Lubumbashi and Luena overturned in the province of Lualaba before exploding into flames. 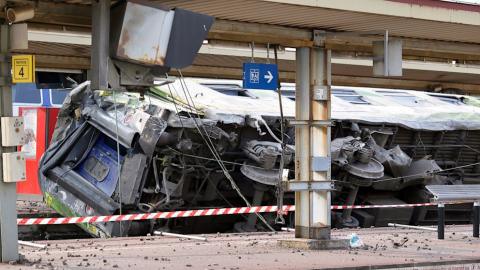 Jean-Marie Tshizainga, the minister of mines of Lualaba province has sent his condolences to the families of the deceased and wished all the injured a speedy recovery.

Tshizainga says the victims were travelling illegally and urged people to desist from using freight trains as their mode of transport.

“We have many passenger trains here in DRC, but people still continue using freight trains. I am urging all train departments around the country to put serious measures so that calamities like these are avoided in the future,” he said.

According to radio Okapi, the train was transporting 13 oil tankers and derailed while climbing a slope near the station of Lubudi before exploding.

Sylvestre Ilunga Ilukamba, a senior official from the national railway company says, “It’s a freight train that derailed and it wasn’t supposed to be carrying passengers. If there were people on board, we consider them to be illegal travellers.”

In 2014, a freight train in the region also derailed killing 74 and injuring 163 illegal passengers in the process.