Durban – The KwaZulu- Natal Provincial Anti-Corruption Unit have arrested five police officers – four from the Durban Metro police and an SAPS officer in an unrelated matter- for corruption.

Police spokesman, Brigadier Jay Naicker said in an operation conducted on Wednesday, at Tongaat, four police officers from the Durban Metropolitan Police aged between 30 and 42 were arrested for corruption and theft.

This arrest follows an investigation by the Provincial Anti-Corruption Unit into a corruption and theft case reported on 10 June 2020. 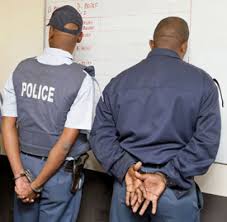 “The four suspects received intelligence about a shop owner suspected to be selling cigarettes at La Mercy in Tongaat. They proceeded to the shop and questioned the owner concerning the allegations,” said Naicker.

Naicker added that the owner denied selling cigarettes and indicated he had locked up his cigarettes in a cupboard.

“The men demanded the cupboard keys before they removed cigarettes and an undisclosed amount of cash. The suspects later released the complainant who reported the matter to the police. They did not hand in the cigarettes and cash at any police station,” he said.

The four suspects appeared in the Verulam Magistrate’s Court on Thursday.