Moscow- 71 people have been killed in a plane crash 40km outside Moscow, shortly after the plane take-off from Moscow’s Domodedovo airport on Sunday.

Saratov Airlines Flight 703 went down on Sunday near Ramenskoye town, the Antonov An-148 aircraft had 65 passengers and six crew members on board when it went down. Russian transport minister Maxim Sololov, said there were no survives, the plane was heading to

“Witnesses said they saw a burning plane falling out of the sky,” said Al Jazeera’s Rory Challands, reporting from Moscow. Orsk city, about 1,500km away, near the border with Kazakhstan.

Russian president Vladmir Putin has sent out his condolences to families who have lost loved ones.

President Secretary Dmitry Peskov was quoted as saying by Tass news agency , “The president has instructed the government to set up a special commission over the plane crash in the Moscow region,”

It is not known what was the cause of the crash but it it being reporting it might be due to the current weather conditions, as Russia is experiencing its most heaviest snowfall in decades. 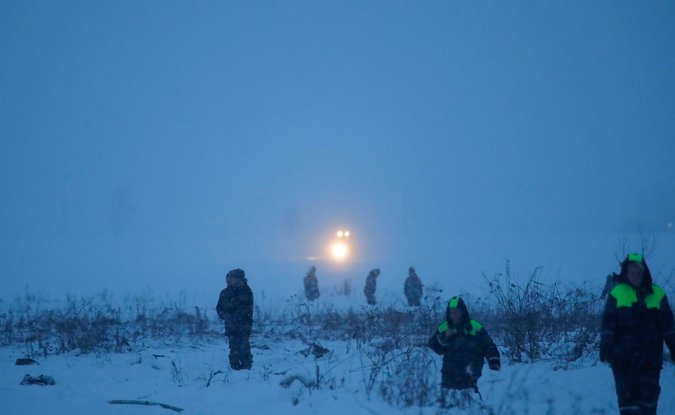 Photo Credit- New York Times.  Emergency services crews at the site of the crash. Fragments of the plane was discovered, with many bodies found on site., near Stepanovskoe, Russia.

Russian investigators have said that, “no reports about technical malfunctions were received from the plane’s crew” ahead of the crash.

Saratov Airlines is one of many small regional airlines operating in Russia.