Cape Town – City Press newspaper released an apology by order of the Press Council of South Africa (PCSA) in which they apologised to Johannesburg based Pastor Alph Lukau regarding allegations levelled against him in a previous article.

Pastor Lukau was the target of multiple media attacks after the widely viewed resurrection service that shocked the world. It is widely reported that Lukau and his family including his wife and children were the subject of vicious online and physical attacks when groups of people armed with stones and battons staged sit ins at his Sandton church which some newspapers linked to xenophobic malice.

Lukau through his lawyers has since argued that all the allegations were false and the circulated articles were not supported by facts. A spokesperson for the church added that none of the media houses placed effort in their news articles to support the allegations with facts or evidence.

In its analysis, the Press Council of South Africa (PCSA) alluded to the fact that the media should verify the accuracy of doubtful information, if practicable; if not this shall be stated; and “the media shall exercise care and consideration in matters involving dignity and reputation.”

Following the controversy, an increasing number of South African newspapers have come back to apologise to the Sandton Pastor for biased or fake reportings that are speculated to have been fueled by the enemies of the ministry. Well known media houses like The Sowetan and The Citizen printed retractions and/or apologies due to false witnesses and biased reporting.

This publication is in possession of the Press Ombud ruling of 28 September which ruled that City Press should apologize to Pastor Lukau and the church.

In the weeks following the ‘resurrection’ video, hundreds of pastors, bishops, and ministers from different parts of the world have posted videos and messages on social media showing their love and pledging their support to Pastor Lukau.

Lukau received staunch support from clergymen who stated that these attacks were nothing but an attack on the Kingdom of God.

City Press apologises to Mr Alph Lukau of Alleluia Ministries International for not specifically putting to him the allegations of sexual assault and not allowing him the right of reply. 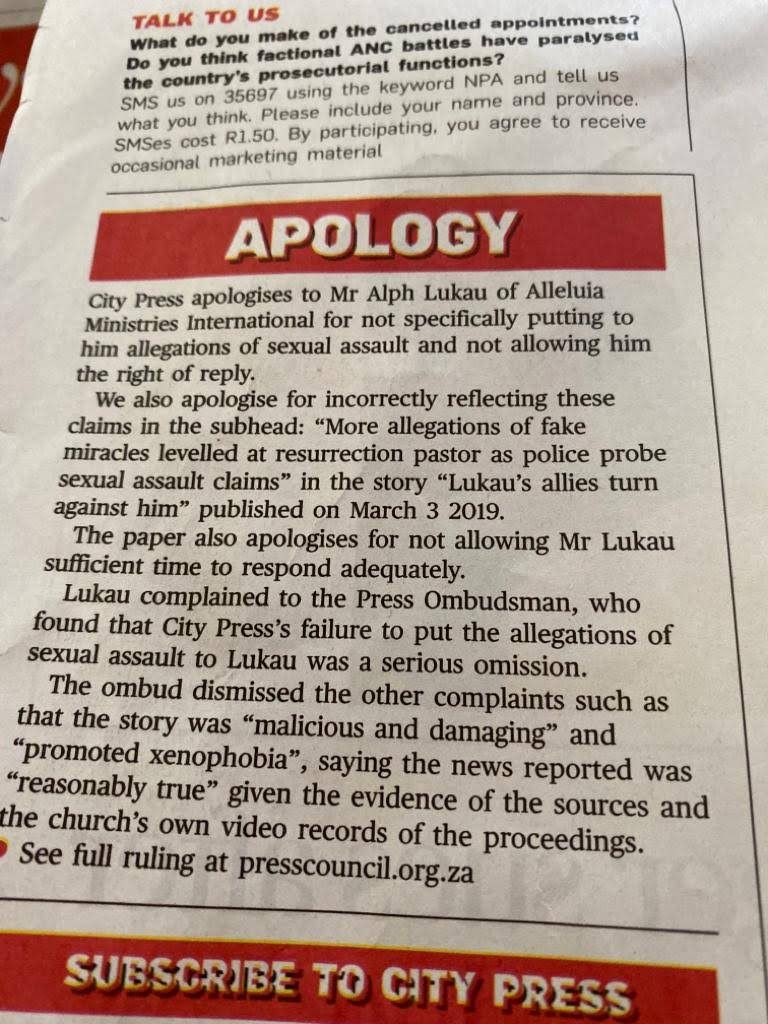