A similar engine fault behind a fatal mid-air engine explosion that punctured a passenger jet window was reported in 2016, it has emerged.

A female passenger died after she was nearly sucked from the cabin of a Southwest Airlines flight travelling from New York to Dallas on Tuesday.

Investigators say there was a fault with the engine’s fan blades – the cause of the incident two years ago.

US aviation authorities are to order inspections of similar jet engines.

Southwest Airlines Flight 1380, a Boeing 737 which was carrying 149 people, was forced to make an emergency landing at Philadelphia airport on Tuesday following a fault with one of its CFM56-7B engines.

An initial investigation found evidence of metal fatigue where a fan blade had broken off, according to the US National Transportation Safety Board (NTSB).

A similar incident was recorded in 2016 involving a Southwest flight that landed safely in Florida.

Fan blades that have undergone a certain number of flights will have to be given ultrasonic tests, the Federal Aviation Administration (FAA) has said.

It added that the “airworthiness directive”, which will require inspections of a large number of CFM56-7B engines, would be issued within the next two weeks. 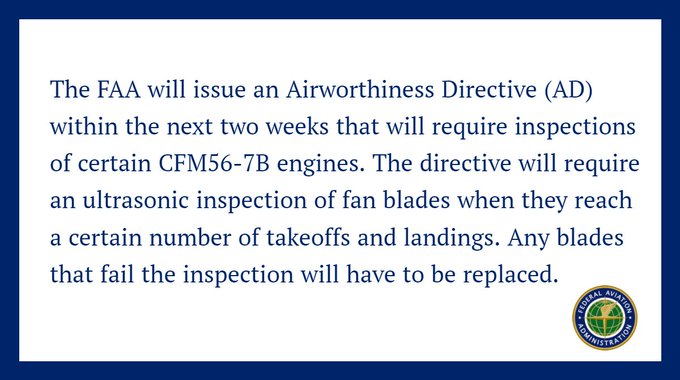 The CFM56-7B engine is in use on more than 8,000 Boeing 737 planes worldwide, the manufacturer says.

Last year, the FAA estimated that some 220 of these engines would require testing, having carried out a certain number of flights.

On Wednesday, other airlines that use planes fitted with the CFM56-7B engine, including United Airlines, American Airlines and Delta Air Lines, said they had begun inspecting some of their aircraft.

What have investigators said?

NTSB chairman Robert Sumwalt told reporters that a fan blade had broken off due to metal fatigue and that a second fracture had been recorded about halfway along its length.

He could not say if the incident indicated a fleet-wide issue with the Boeing 737-700.

Mr Sumwalt also said a casing on the engine was meant to contain any parts that come loose but, due to the speed, the metal was able to penetrate the shell.

The FAA did not say how many engines would be inspected. It said that any fan blades that failed the inspection would have to be replaced.

In 2016, a Southwest Airlines flight made a safe emergency landing in Florida after a fan blade separated from a similar CFM engine.

Debris ripped a hole more than a foot long in the fuselage of the jet above the left wing, causing cabin decompression. An investigation into that incident also found signs of metal fatigue, according to the NTSB.

So what do we know about the engines?

They were developed by French-US joint venture CFM International, which says it is the “world’s leading supplier of jet engines for single-aisle aircraft”.

CFM’s parent companies are sending 40 technicians to help Southwest inspect engines. French officials have also said they are travelling to the US to assist with the investigation.

In a statement, CFM expressed its condolences to the family of the woman who died.

Who was the victim?

Jennifer Riordan was a 43-year-old mother-of-two and executive for Wells Fargo bank in Albuquerque, New Mexico.

Shrapnel from the shredded engine smashed the window next to her causing rapid decompression in the cabin that nearly blasted her out of the jet.

Other passengers pulled her back in and tried to revive her but she died from her injuries.

Philadelphia’s medical examiner said on Wednesday that Ms Riordan had died of blunt impact trauma to her head, neck and torso.

Seven other passengers were slightly injured.

Ms Riordan was the first passenger to die in an accident on a US commercial airliner since 2009.

Who piloted the aircraft?

Capt Tammie Jo Shults was hailed as a hero by passengers on the stricken flight.

On Wednesday, she and First Officer Darren Ellisor said in a written statement released by the airline: “As captain and first officer of the crew of five who worked to serve our customers aboard Flight 1380 yesterday, we all feel we were simply doing our jobs. Our hearts are heavy.”

They said they were working with investigators and would not be talking to the media.

Capt Shults, a New Mexico native, graduated with university degrees in biology and agribusiness before joining the military.

She served in the US Navy for 10 years and flew fighter jets before leaving active service in 1993 after achieving the rank of lieutenant commander.

Her husband, Dean Shults, is also a pilot for Southwest, according to a relative.

On social media, some compared the mother-of-two with Captain Chesley “Sully” Sullenberger, who glided a US Airways plane into New York’s main waterway in 2009 in what became known as “The Miracle on the Hudson”. A film about the incident became a box office hit in 2016.

How did the drama unfold?

About 20 minutes after the twin-engine Boeing 737 took off, shrapnel pierced the passenger compartment causing the plane to lose pressure and rapidly descend.

With oxygen masks over their mouths, passengers screamed and braced for impact.

For a few seconds, the aircraft rolled to an angle of 41 degrees before levelling out and starting an emergency descent, federal investigators said on Wednesday.

“We have part of the aircraft missing so we’re going to need to slow down a bit,” she said, adding that some passengers had been hurt.

“Injured passengers, okay, and is your airplane physically on fire?” asks a male voice in the tower, according to a recording released by officials.

“No, it’s not on fire, but part of it’s missing,” Capt Shults replies.

“They said there’s a hole, and uh, someone went out,” she calmly adds.