CAPE TOWN – City of Cape Town officials are responding to several cases of flash flooding across the city.

Flooding has been reported in informal settlements in Khayelitsha, Macassar, Philippi, Gugulethu, Kraaifontein, Atlantis and Maitland.

In the urban areas flooding has been reported in Parow, Goodwood, Ravensmead, Uitsig, Somerset West, Woodstock and Elsies River have also been affected.

Many images and videos of flooded areas across the city have been widely posted on many social media platforms.

The South African Weather Service has warned that the cold and rainy weather conditions in the Cape Town will continue with the cold front expected to hit Gauteng on Monday night.

According to a Eyewitness News report the Lansia Road in Hanover Park on Sunday, the road was flooded with muddy water, pooling in the front yards and garages of homes. 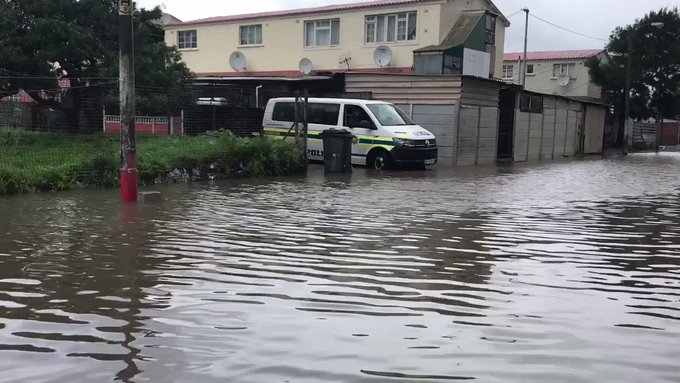 These officers can’t even get through. MM

Some children had to be carried on the backs of adults, while others held onto each other to pass through the roads.

Residents Rushana Andrew’s said they are used to these conditions, he says it happens every winter. 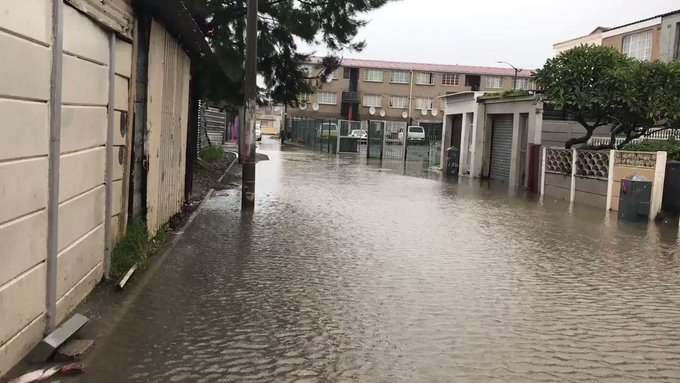 #CTFlooding This is Lansia road in Hanover Park. Flooding as a result of heavy rains; residents say drains are blocked. @MoniqueMortlock

Twitter Ads info and privacy
The City of Cape Town’s Brett Herron said the cause of the flooding is blocked gallows.

“These are the entrances to the stormwater system, from the roadways and these are often blocked through debris or dumping.”

“Various roads across the city have been affected by the heavy downpours. No evacuation or emergency shelter has been required. The Roads and Stormwater Department has been clearing roadways and unblocking drains. The Department of Human Settlements is making assessments and will provide residents in informal settlements with flood kits.”