JOHANNESBURG- The alleged “Krugersdorp killers”‚ who are a group of six accused of carrying out 11 vicious murders‚ appeared in the high court in Johannesburg on Monday.

The accused are Cecilia Steyn‚ her friend Marinda Steyn and her two children Marcel and Leroux Steyn‚ and Zak Valentine.

The group of six are accused of murdering 11 people from the year 2012 to 2016, the chargers also included aggravated assault‚ possession of an unlicensed firearm‚ fraud and identity theft.

Cecilia Steyn who is believed to started the murders a self-proclaimed child psychologist‚ had a fall out with the pastor of the Overcomers Through Christ church.

In July 2012‚ church member and lawyer Natacha Burger had her throat slit in her neighbour’s home. The neighbour‚ Joyce Boonzaaier‚ was also killed in the same way. Police believe the killers forced Boonzaaier to lure Burger to her house so that they could kill her.

In August month‚ Pastor Reginald Bendixen was stabbed and hacked to death with an axe at his home in Honeydew‚ western Johannesburg.

Valentine’s wife‚ 25-year-old Mikeila‚ was killed in October 2012 in their home in Ruimsig‚ Roodepoort‚ is believed to have refused to support the alleged murderous revenge plot carried out by her husband and other breakaway members of the church.

Police added her blood and intestines were splattered on the ceiling. 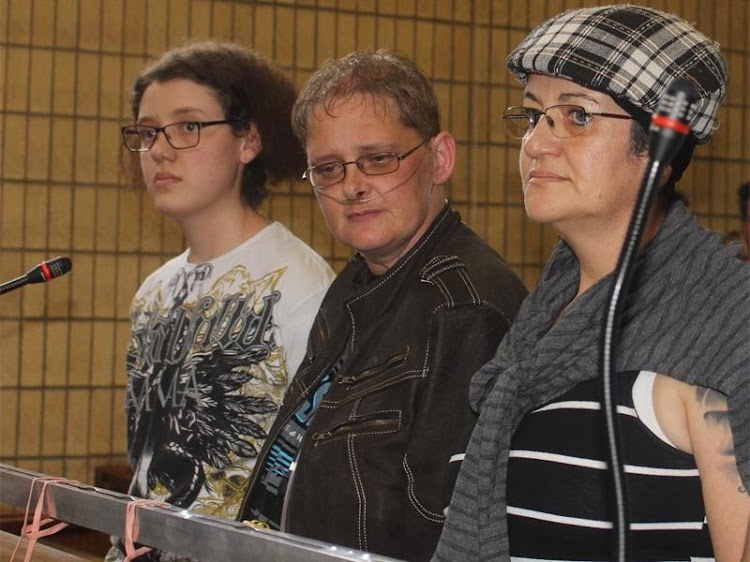 The Steyn family are among five people on trial in Krugersdorp on Gauteng’s West Rand for alleged involvement in the killings of church members as well as professionals lured to their death.
Image: Sunday Times

It is alleged that the four murders made Valentine and his accomplices more confident. They are alleged to have committed seven more murders in the Krugersdorp area‚ mostly for money. The group is alleged to have put their revenge plan on hold, and carried out armed robberies instead to sustain themselves.

Ben Booysen investigating the murders said the accused all have the tattoo of Electus per Deus (Chosen by God).

Booysen said, “They don’t speak about God‚ they talk about ‘our’ god‚ but at this stage I don’t know who their god is.”

July 26: Natacha Burger‚ 33‚ and her neighbour Joyce Boonzaaier‚ 68‚ had their throats slit in Centurion. The bodies were found in Boonzaaier’s home.

August 14: Pastor Reginald Bendixen‚ 75‚ was stabbed and hacked to death at his home in Honeydew.

October 11: Mikeila Valentine‚ 25‚ was stabbed to death in the home she shared with her husband‚ Zak Valentine.

November 27: Peter Meyer‚ 51‚ and his wife Joan‚ 47‚ were stabbed to death at their home in Rudd Street‚ Noordheuwel.

December 6: Jarrod Jackson‚ 44‚ was burnt to death in a car in Petrus Steyn in the Free State.

January 27: Glen McGregor‚ 57‚ was shot on his smallholding in Randfontein.

May 10: Anthony Scholefield‚ 64‚ was strangled to death. His body was found in the boot of his car‚ which was abandoned on Premier Street in Krugersdorp. His belongings were stolen and R9 600 was withdrawn from his bank account.

May 26: The body of Kevin McAlpine‚ 29‚ was found in the boot of his car on the corner of Sivewright and Francis streets in Krugersdorp. He was robbed of his wedding ring‚ laptop‚ shoes‚ watch and R1 300 in cash. He had been married to 26-year-old Kezia for a year and she was six months pregnant.

May 31: The body of Hanlé Lategan‚ 52‚ was discovered in the veld along the Randfontein River on a farm in Elandsvlei. Her cell phone‚ gold and diamond ring‚ watch and R3 000 in cash was stolen. Her car was found in front of the Krugersdorp Private Hospital.

IN THE DOCK ARE:

The alleged ringleader of the group. Self-proclaimed psychologist. Long history of problems‚ according to her parents.

High school teacher and well liked by colleagues. Close friend of Cecilia Steyn (not related). Accused of hiding ammunition in her classroom.

Introvert. Refused to be photographed. Straight A student who loves reading. Devoutly loyal to her mother‚ Marinda Steyn.

Feels “safe” in jail. Shows no emotion but loves his mother Marinda Steyn very much.

Confessed‚ tried separately and sentenced to 30 years’ jail‚ 10 of which were suspended on condition that he testify against the other accused. Worked for the Meyers for many years.