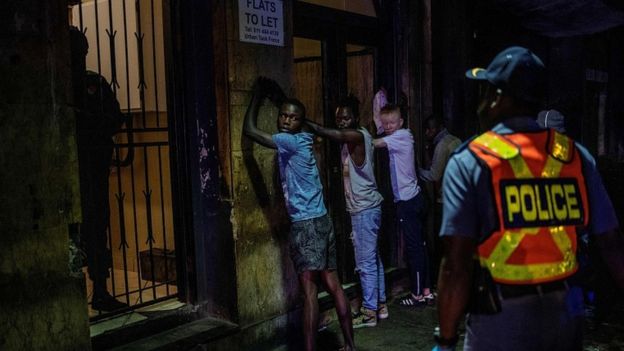 Johannesburg -A number of people have been arrested for the alleged disregard for South Africa’s lockdown rules that kicked in officially at midnight on Thursday.

On Friday morning, the South African Police Service (SAPS) raided clubs and taverns where people had gathered and were drinking in the early hours.

Minister of Police Bheki Cele warned that there would severe consequences for those who disregarded the rules. But shortly after the lockdown started, people were still seen roaming the streets of Johannesburg.

Several people were taken into custody when they were found at a tavern in Hillbrow. There is footage, showing the Main Den Pub being closed under police guard and several patron being loaded on the back of a police van.

In KwaZulu- Natal, 19 people were being investigated for violating measures relating to the national state of disaster declared by Ramaphosa.

Part of the 19 alleged committed the offences at the Durban beachfront, where bathing in the ocean was prohibited because of the Covid-19 virus.