In early 2015, a refugee woman, named Noela Rukundo, flew 7,500 miles from Melbourne, Australia, to her native Burundi to attend her stepmother’s funeral.

Just as Rukundo was dozing off in her hotel room at around 8 p.m., she got a call from her husband, Congolese-born Balenga Kalala, according to The Age.

“He told me to go outside for fresh air,” Rukundo told BBC News.

Thinking he was just showing concern for her health, Rukundo went outside. Suddenly, she was grabbed off the street at gunpoint by three kidnappers.

Rukundo was held captive for two days while her captors waited for money to be wired to them from the man who had hired them. During her captivity, the gang’s boss had called him and had been instructed to “kill her.”

Much to her horror, Rukundo recognized the voice on the other end of the call. It was her husband’s!

“I heard his voice. I heard him. I felt like my head was going to blow up,” Rukundo said. “Then they described for him where they were going to chuck the body.” 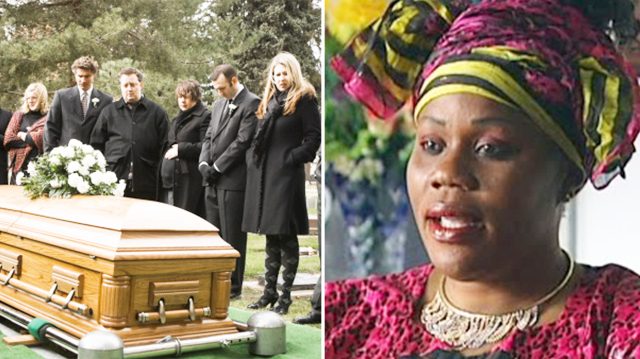 Fortunately, Rukundo was eventually released by her kidnappers, who apparently didn’t want to kill a woman. They gave her all the evidence she would need to implicate her husband and have him locked up: a mobile phone memory card with recorded telephone conversations plus receipts from the Western Union money transfer. Apparently, her husband, Kalala, had paid the hitmen almost AU$7,000 (approx. US$5,500) to kill her.

Her husband, who thought the murder had been executed as planned, then proceeded to inform his friends how Rukundo had been killed in an accident while in Burundi.

Upon hearing the tragic news, the African community in Melbourne provided spiritual and financial support to Kalala and their children, aged 5, 10, and 11.

On Feb. 22, when the last mourners were leaving, Kalala was suddenly confronted face to face with none other than Rukundo, his wife.

“Is it my eyes? Is it a ghost?” a petrified Kalala said.

“Surprise! I’m still alive!” Rukundo replied. “You are a wicked man.” He approached her as if “walking on broken glass.”

Kalala jumped as he touched her shoulder. “Noela, is it you?” he queried. Then he screamed, “I’m sorry for everything!”

But, it was too late, for Rukundo had rung the police.

“He say he wanted to kill me because he was jealous. He think that I wanted to leave him for another man,” Rukundo said. “I felt like somebody who had risen again.”