PRETORIA – Four men walked from Port Elizabeth to the Union Buildings in Pretoria in order to hand over a memorandum to President Jacob Zuma. The memorandum demands the recognition of the Khoisan as the ‘legitimate first race of South Africa’.

For more than two weeks, the group set camping tents on the Union Building lawns. On Monday night, police took them to Sunnyside police station.

On Tuesday, the men went back to the Union Buildings and again set their tents. They have also been on a hunger strike, for the past four days. Chief Khoisan S.A- his name according to his ID book, said the group would not leave until they had met Zuma or Deputy President Cyril Ramaphosa and handed over their memorandum.

“Firstly, we demand the government recognise that we are the first nation of South Africa,” Chief Khoisan S.A. said.

“Secondly, we demand that our language be on the coat of arms and that Khoekhoegowab be an official language of this country because it is the language we speak”. “Thirdly, the land claims date is 1913, but we had land before that time and so this land claims date excludes us. We were also told that we are not coloured,” he said. 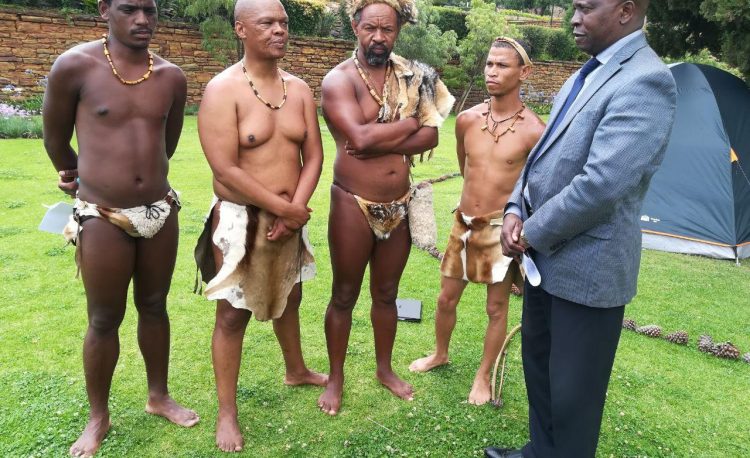 Head of Communications it the department of cooperative governance and traditional affairs, Legadima Leso said the National Khoisan Council (NKC) has indicated the men don’t have a mandate from the council to act on its behalf.