Malema says while he wouldn’t go the legal route of suing some journalists for what they’ve said about the EFF, there are some he’s watching closely.

The leader of the red berets made the remarks last night at a public manifesto discussion with black professionals. 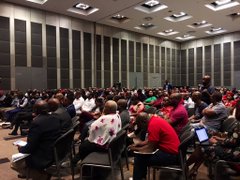 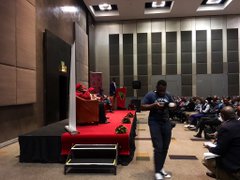 #EFFPublicManifesto consultation with Black professionals is open to the floor. Various professionals from different industries such as property, tourism and education have stood up and spoken about the challenges in those sectors. [KS]

40 people are talking about this

Earlier this week, Malema told his supporters outside the state capture commission in that he knew of several journalists who are supporting Public Enterprises Minister Pravin Gordhan who gave testimony at the enquiry this week.

While speaking to a cheering audience, Malema said he can speak for himself and that he doesn’t have to go around suing journalists.

The EFF leader says the party is not fighting with the media.

“We are not fighting journalists, we are telling them the truth, so they can start doing their work professionally.”

He says it’s about liberating the mind.

“From time to time there are things I want to follow properly but others I just lash at. I can speak for myself.”

On the land question, Malema highlighted that there’s no need to fight with white people and draw blood, but that black people simply need to be empowered.