Reports earlier on emerged that documents were shared by senior DA members on Facebook, which detailed alleged breaches made by the mayor who is fighting for survival.  The documents were fake and not official content issued by the party.

The document appears to be real and has a signature by the Auditor General of South Africa (AGSA) Thembekile “Kimi” Makwetu. 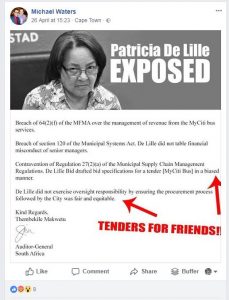 Africa Boso AG’s spokesperson has said that Makwetu sdid not sign the purported document, including that he had any prior knowledge on the origins of the document.

Boso also told News24 that the AG’s municipal findings would only be released later this month.

De Lille took to social media to indicate that she will be laying charges against the duo for sharing the post.

In a Tweet she said, “I will also lodge a formal complaint against the named DA members with the FLC.”

In light of this information, I will be laying criminal charges against those who shared the fraudulent post. I will also lodge a formal complaint against the named @Our_DA members with the FLC. https://twitter.com/news24/status/993488860154867712 …

Twitter Ads info and privacy
However the DA clarified that the shared document was infact not official content by the party and said it was not shared on the party’s social media platforms.

Natasha Mazzone, Deputy chairperson of Federal Council said, “More importantly, this fake letter has never been used as the basis for any disciplinary matter between Patricia de Lille and the party,”

“It is unfortunate that a fake news post which makes use of the Auditor General’s signature has been shared as authentic content by many who have fallen prey to fake news on social media platforms.”

Mazzone added,”The damning findings against Ms De Lille which were presented by the AG to the City of Cape Town as part of his audit opinion are contained on our official website and are accurate.

“The DA is confident that this now clarifies that all content shared on our official party platforms is accurate and authentic.”

Photo Credit- The Citizen and Mail and Guardian