For years, the R&B singer has faced several sexual misconduct allegations. He has denied all claims made against him. Recent allegations in a BBC documentary, however, explores claims of physical abuse and coercion.

By 11am on Thursday, 67,321 people signed the Care2 petition, which has called on the music business, including Sony and Live Nation, to boycott Kelly’s music. At least 10 of Kelly’s concerts have been cancelled so far.

It reads: “R&B singer R. Kelly has preyed on teenage girls for the past 25 years. It’s time our society stops his cycle of abuse.

“In 1994, R. Kelly illegally married 15-year-old Aaliyah, and in 2002, he was indicted on 14 counts of child pornography. He was acquitted six years later because neither the alleged victim nor her parents were willing to testify, but more than 40 others took the stand to confirm that the girl in the video was the 14-year-old girl.”

The Women of Colour in Time’s Up movement have also added their voice to the issue, calling on RCA Records and Apple Music, among others, to take action against the musician.

“As women of colour within Time’s Up (WOC), we recognise that we have a responsibility to help right this wrong. We intend to shine a bright light on our WOC sisters in need. It is our hope that we will never feel ignored or silenced ever again.”

Several celebrities, like Lupita Ngong’o, are supporting the Time’s Up movement’s call for a full investigation into the sexual abuse allegations.

I stand with the women of #timesup #MuteRKelly 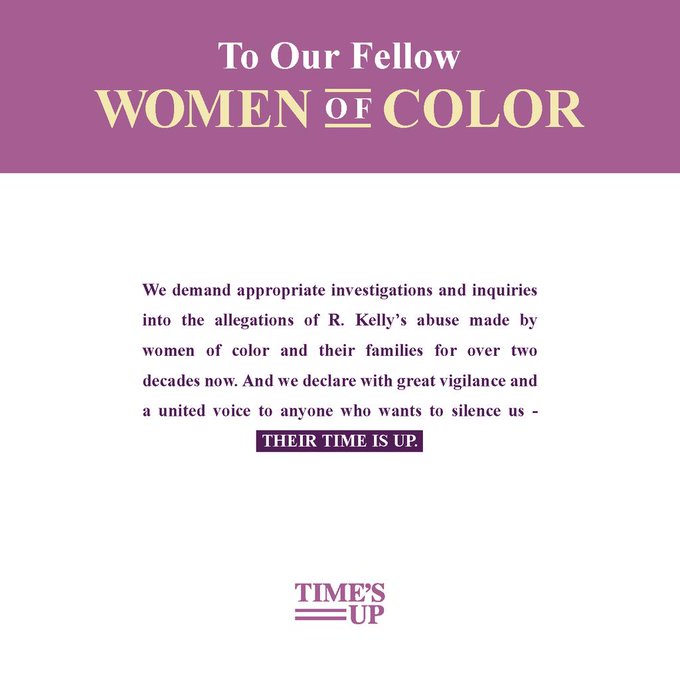 Today we join the call to #MuteRKelly and insist on safety and dignity for women of all kinds. #TIMESUP

Today we join the call to #MuteRKelly and insist on safety & dignity for all women. We demand appropriate investigations and inquiries into the allegations of R. Kelly’s abuse made by women of color & their families for over two decades now. #WOC #TIMESUPhttps://www.theroot.com/women-of-color-within-times-up-join-muterkelly-protest-1825646793?utm_source=theroot_twitter&utm_medium=socialflow …

Women of Color Within Time’s Up Join #MuteRKelly Protest

To Our Fellow Women of Color:

Kelly’s management has meanwhile issued a statement, describing him as a “target of a greedy, conscious and malicious conspiracy to demean him, his family and the women with whom he spends his time”.