Just three days after the birth of his son, Prince Harry traveled to the Netherlands on Thursday to officially launch the one-year countdown to the Invictus Games in The Hague.

It comes a day after the Duke of Sussex and his wife Meghan, the Duchess of Sussex, gave the world its first glimpse of their newborn son, Archie Harrison Mountbatten-Windsor.
Harry had originally planned to visit the country on Wednesday for two days, but shortened it to a day-trip last week, fueling fevered speculation about the baby’s birth. The prince is now in the Netherlands to promote the fifth international sporting competition for wounded veterans and members of the military, which he founded in 2014.
On Thursday he was met by Princess Margriet of the Netherlands at Sportcampus Zuiderpark, along with chairman of The Invictus Games, Lieutenant General Mart de Kruif, according to Britain’s Press Association (PA) news agency.
Spectators shouted well wishes to the prince as he arrived, some of whom had brought gifts according to PA.

‘Our bundle of joy’

On Wednesday the Duke and Duchess of Sussex appeared in front of selected media to introduce their first child to the world, who was born at 5:26 a.m. Monday morning. 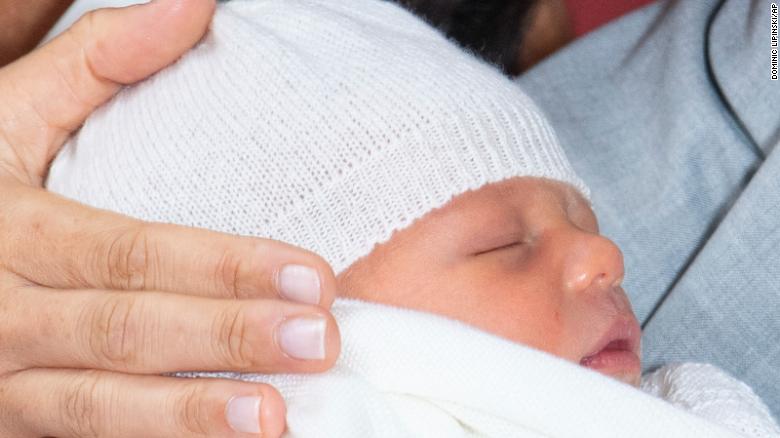 Britain’s Prince Harry and Meghan, Duchess of Sussex, during a photocall with their newborn son, in St. George’s Hall at Windsor Castle.
Harry said becoming a parent was “amazing,” while cradling the newborn at St. George’s Hall in Windsor Castle.
“We’re just so thrilled to have our bundle of joy. We’re looking forward to spending some precious time with him as he slowly starts to grow up,” he said.
Meghan, meanwhile, said their son has the “sweetest temperament.”
“It’s magic, it’s pretty amazing. I mean I have the two best guys in the world. So I’m really happy,” she gushed.
Later on Wednesday afternoon, the couple shared an image of Queen Elizabeth II meeting her newest great-grandchild, along with the Duke of Edinburgh and Meghan’s mother Doria Ragland.
They also used this post to reveal their chosen name. 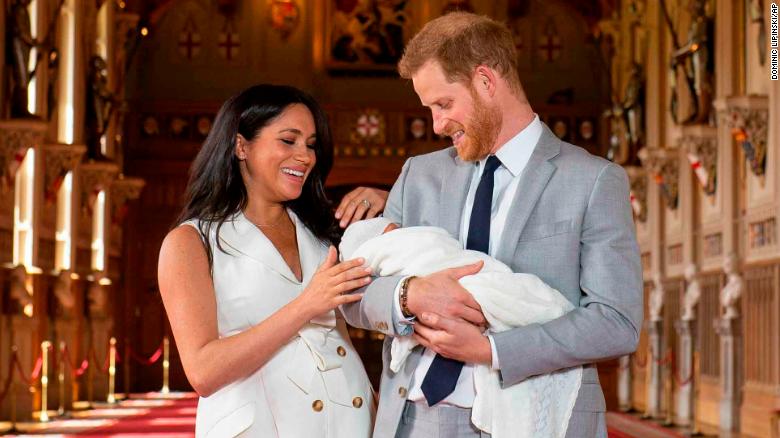 Archie was born Monday at 5:26 a.m. at an as-yet-undisclosed location.
“Instead of a traditional royal name, they chose a name they loved,” said CNN’s royal correspondent Max Foster. “What they are very much doing is reflecting their generation. They are not looking to history, they are looking to now.” 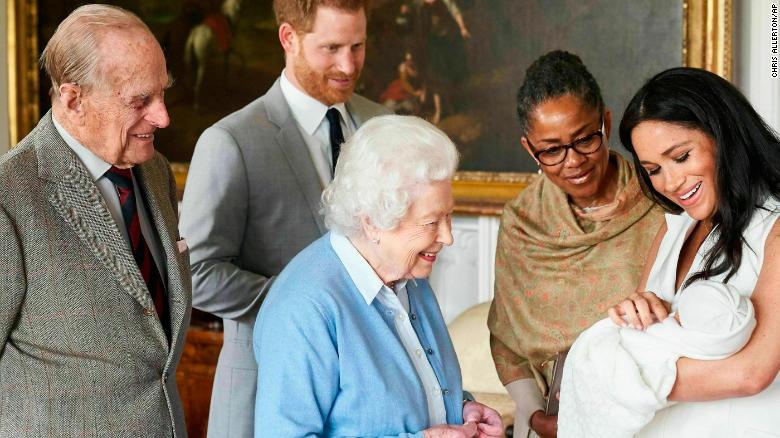 Britain’s Prince Harry and Meghan, Duchess of Sussex, joined by her mother Doria Ragland, show their new son to Queen Elizabeth II and Prince Philip at Windsor Castle.
Archie Harrison may not have any precedent in the royal family, apart from Archibald Douglas. He was the 6th Earl of Angus and Scotland’s King James V’s stepfather until Margaret Tudor, the elder sister of England’s Henry VIII, divorced him in the 16th century. But digging further back to 1066, using data from Britannica Academic and the monarchy’s official website, CNN has not found the name Archie or Harrison among the names of any British monarch and their immediate offspring.
Archie Harrison is seventh in line to the throne and does not qualify immediately for the title of prince. Buckingham Palace told CNN on Wednesday that the Duke and Duchess of Sussex had chosen not to use any title at all for their son, even though Archie will have the right to use his father’s second peerage title, Earl of Dumbarton.
While not currently a prince, when Prince Charles becomes King, Prince Harry’s son will automatically become His Royal Highness Prince Archie Harrison Mountbatten-Windsor.
Source – CNN News