Cape Town – After 20 years since winning the final on home soil, France have been crowned Soccer World Cup champions for the second time in their history after beating Croatia 4-2 at the Luzhniki Stadium in Moscow.

The opening ten minutes belonged to Croatia as they piled on all the pressure with their familiar high pressing game, giving France no room to counter attack, with maestro Luka Modric dictating play from the middle of the pitch. But France went into the lead after a own goal from Croatian striker Mandurkic. Croatia would sensationally equalise through Persvic.

However, with Croatia creating more chances, gave France’s Antoine Griezmann darting forward, but before he was able to pull the trigger, Marcelo Brozovic brought down the Atletico Madrid forward, and referee Pitana Nestor blowing his whistle to give Les Bleus a 30-yard free-kick by using the VAR system. 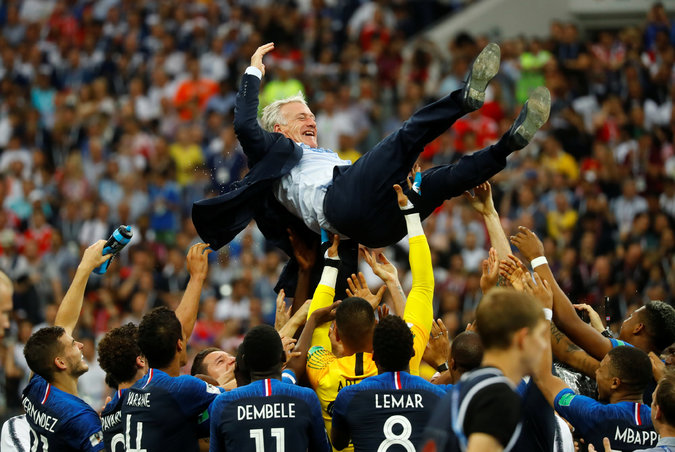 France coach, Didier Deschamps, is thrown into the air by his players after winning the World Cup. CreditKai Pfaffenbach/Reuters

The V.A.R. system, approved controversially earlier this year for use in its first World Cup performed above expectations in the tournament. Pitana went to the sideline between the benches and, with the V.A.R. in his ear, scrolled through the play before returning to the field to signal a penalty kick for a handball.

France would then completely make it outreach for Croatia after Paul Pogba striked a beauty outside the box. Then teenager Kylian Mbappe would become the 2nd teenage player in World Cup history to score in the final, the first teenager to do so was legend Pele.

French coach Didier Deschamps won the world cup as a player in 1998 and made history, as he returned the Cup back home 20 years later.