As she was led from court in Brooklyn on Friday, Allison Mack appeared to wipe away a tear. The actor, best known for a role in the TV series Smallville, had entered a plea of not guilty to sex trafficking and forced labor charges which carry mandatory minimum sentences of 15 years and could lead to life in jail. 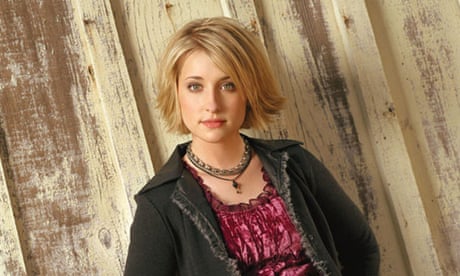 Flanked by lawyers and closely shadowed by FBI agents and federal marshals, the 35-year-old’s distress provided the first glimpse of what the future may hold for senior members of an alleged cult known as Nxivm.

Prosecutors claim Mack was second-in-command at the upstate New York headquarters of the group, and therefore instrumental in forcing new recruits to conform to the sexual demands of leader Keith Raniere.

The government alleges that so-called Nxivm “slaves” were forced to starve; ordered to remain celibate; and held down as Raniere’s initials were branded below their hips with a cauterizing pen. Mack is alleged to have put her hands on the women’s chests, telling them to “feel the pain” and to “think of [their] master”.

“Ms Mack was one of the top members of a highly organized scheme which was designed to provide sex to [Raniere],” assistant US attorney Moira Penza said in court. “Under the guise of female empowerment, she starved women until they fit her co-defendant’s sexual feminine ideal.”

The government also alleged that Mack forced recruits to pose naked for photos – “including on one occasion close-up pictures of their vaginas” – that were given to Raniere, 57. He was arrested in Mexico last month, after being indicted, and has pleaded not guilty on charges of sex trafficking, sex trafficking conspiracy and forced labor conspiracy. He is also being held in New York.

Mack, who played Clark Kent’s friend Chloe Sullivan in Smallville – the hit a series about Superman’s origins – was ordered held, judge Cheryl Pollak arguing that her lawyers failed to offer a “sufficient” bail package given the gravity of the charges.

Mack’s attorneys had argued that she was not a flight risk because she returned to the US voluntarily from Mexico. “The allegations contained in the indictment are only that: allegations. The hard facts establish that she is not a risk of flight,” lawyer Sean Buckley said.

Outside the court, Stanley Zareff – a friend of Dynasty star Catherine Oxenberg, whose daughter India is believed to be a member of Nxivm – said Mack had no right to be freed. India Oxenberg, she said, had become involved with Nxivm as part of a search for self-enlightenment.

“I hope that she can see the light and wake up,” he said. “Her family loves her. This is a crazy group. This is not fake news. And we certainly don’t want Allison Mack released. With Keith away, she’s now the leader of the group and I don’t trust her for a minute.”

Nxivm was founded as an executive-focused self-help organisation but it appears to have metamorphised into a personality cult centred on Raniere, who falsely claims to have been a child prodigy who held the 1989 Guinness World Record for “highest IQ” and who followers reverentially call “Vanguard”.

Raniere was arrested at a villa outside Puerto Vallarta in Mexico on 25 March. Mack and Clyne were reportedly with him but fled.

According to the complaint against him, in 2003 Raniere began running workshops at a compound about 20 miles outside Albany, the New York state capital. The curriculum included teaching women about “the need for men to have multiple sexual partners and the need for women to be monogamous”.

By 2015, the government alleges, Raniere had established a society within Nxivm called DOS or “The Vow”, in which “women were recruited to be slaves under the false pretense of joining a women-only mentorship group”. Any challenge to his authority was brutally resisted, prosecutors allege, saying Raniere “physically assaulted at least two intimate partners” and punished one member for expressing romantic feelings for another with 18 months confinement.

Marc Agnifilo, a lawyer for Raniere, said earlier this month he was “confident these allegations will be soundly disproven”.

On Friday, prosecutors expressed concern over granting Mack bail, arguing that Nxivm members appeared to have access to money. An account Raniere was using at the time of his arrest had $8m in it, authorities have said.

It is thought that the group’s access to funds may be through the trusts of Clare and Sara Bronfman, heiresses to the Seagram liquor fortune and members of Nxivm. In 2003, Forbes published an exposé in which family patriarch Edgar Bronfman Sr described the group as “a cult”. A 2010 report in Vanity Fair claimed the Bronfman sisters’ funds were helping Nvixm resist a “multi-million-dollar, multi-front legal war”.

According to the Albany Times Union, New York attorney general Eric Schneiderman opened and then suspended an investigation into the Ethical Science Foundation, a group formed in 2007 by Clare Bronfman.

The government investigation of Nxivm gathered pace last year, when former member Sarah Edmondson provided a first-hand account of the alleged branding practice. Edmondson later told Vice: “It was like a bad horror movie. We even had these surgical masks on because the smell of flesh was so strong.”

Her account, published by the New York Times, sparked an FBI investigation and triggered Raniere’s flight to Mexico. He did, however, respond to the Times story, posting on the group’s website: “This story might be a criminal product of criminal minds who, in the end, are also hurting the victims of the story.”

The group may not have ended recruitment efforts. Last month, according to the New York Post, a member threw a party in Williamsburg, promising “an evening of meeting cool, like-minded artists and chatting about life, authenticity, and the awesome human potential”.

Mack’s attorneys are due back in court on Monday, to petition for bail. Prosecutors have warned that Nxivm members have registered websites in the names of potential witnesses. Mack, prosecutor Penza said on Friday, “obviously has the ability to manipulate people. She has, based on the structure, a number of slaves underneath her who have pledged vows of obedience”.

Raniere will be in Brooklyn federal court on Wednesday, to request bail.

Article Soured from the Guardian