KABUL- Islamic State immediately claimed responsibility for the attack in the capital Kabul, which also left 119 people injured and 57 dead.

According to police the suicide bomber targeted civilians who had gathered to receive their national identification cards.
The huge explosion could be felt kilometres away, shattering windows across the city.

Police responded by closing all roads around the site of the blast allowing only medical personnel access. 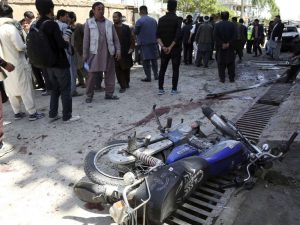 TV footage broadcast across the country showed live footage of hundreds of distraught people gathering in nearby hospitals hoping for any news on their loved ones.

“All the victims were civilians and women and children are among them.”

US ambassador John Bass posted on Twitter, “This senseless violence shows the cowardice and inhumanity of the enemies of democracy and peace in Afghanistan.”

Islamic State claimed responsibility they posted a statement by its Aamaq news agency, saying it had targeted Shiite “apostates”. 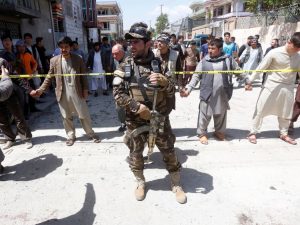 In the Afghan security forces have continuously struggled to prevent attacks by the IS and the Taliban after the US and NATO concluded their combat mission at the end of 2014 and pulled out many of their military personnel.

Both groupsl terror groups launch attacks regularly, the Taliban usually targets the government and security forces, and IS is attacking the country’s Shiite minority.

Both terror groups goal is to establish a harsh and strict form of Islamic rule in Afghanistan, and are opposed to democratic elections.