Johannesburg- Trevor Noah, Daily Show host released a video of himself and his grandma that was shoot while he was in South Africa for the Global Citizen festival.

The video does show his gogo’s home having a vintage stove and fridge, with some Twitter users saying that Noah should ‘bless her’ with material possessions as his estimated worth is $13 million.

While some called for Noah to buy his grandmother a new fridge, others said he should go a step further and renovate her house.

Not only a fridge, he must renovate the house too, I am earning less than 20000 per month but I build a house for my parents.

I like @Trevornoah – no pan intended but w all that money he earns, he should renovate his grandma’s place n install solar lighting. I couldn’t take my eyes off that broken kitchen unit n old fridge

Surely you can afford to renovate her house & make it look more decent? Doesn’t mean if she’s old, she should live a life of mediocrity. That fridge alone is older than you.

20 people are talking about this

@Trevornoah DONT BUY YOUR GRANDMA A GENERATOR!! BUY HER A NEW HOUSE!! Or at least add on or renovate hers!! Don’t they have some South African version of “HGTV House Beautiful”?! They’re MAKING A MOVIE ABOUT YOU! Spend some COIN on the woman! That’s the point of Rags to Riches!!

Trevor visits his Grandma Koko in Soweto, South Africa, to talk about his childhood, her life under apartheid, and what exactly he needs to do to get her to watch The Daily Show. 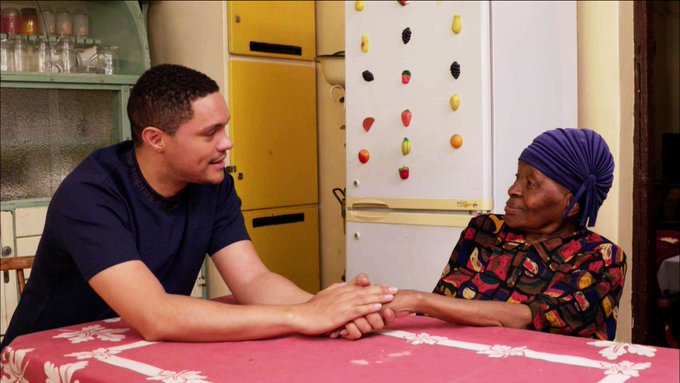 Gogo is 91 she needs a good life@Trevornoah

16 people are talking about this

WATCH: @Trevornoah‘s gogo tells him she can’t watch his show due to loadshedding | @Channel24 http://ow.ly/9Rik30mR1Uz 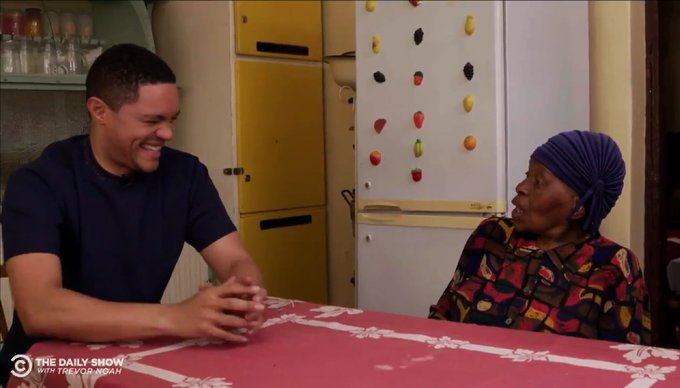 The interview is sweet and very informative kodwa Trevor the furniture is too old, renovate and give gogo a better life, you’re a millionaire for goodness sake.

Twitter Ads info and privacy
But many rushed to Trevor’s defence, one user pointed out that in Noah’s book, Born a Crime, he describes his attempts to help his gogo financially which she refused.

Others said the mentality of expecting him to help his gogo materially amounts to “black tax”, a term used for the custom of sharing your salary with your family before considering yourself, which one user said “must fall”.

You need to read his book to understand why Trevor Noah didn’t buy his grandma a house or renovate …. Y’all love jumping into conclusions… He tried, she refused. She’s happy, why aren’t you?

You really cannot just renovate an African’s old person’s house. Unless if they allow you to or are unable. Leave Trevor Noah alone.

Those asking why doesn’t @Trevornoah renovate Gogo’s house! Simple,it’s not his house,no matter how rich,he never gets to erase Gogo’s hard work&pride in what she did for herself. Love doesn’t lie in materialism like the demanding modern parents,reason for most black child debt!

WATCH: @Trevornoah‘s gogo tells him she can’t watch his show due to loadshedding | @Channel24 http://ow.ly/9Rik30mR1Uz

he doesn’t have to renovate the house. it’s not a must. black tax must just fall.