Police confirmed that two priests were among at least 18 other people killed in a church central in Nigeria.

Benue state police commissioner Fatai Owoseni in the state capital of Makurdi said around 30 suspects herdsman attacked Mbalom community is a unstable region, where the killing of worshipers and two priests comes after 10 people were killed a few days ago in a similar conflict.

“They attacked the venue of a burial ceremony and also attacked the church where the two reverend fathers were holding mass,” said Owoseni.

“We were able to recover 16 bodies from the scene of the attack and those of the two priests.” 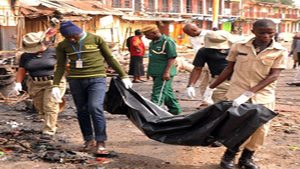 Worshipers gathered around 5:30am service at St Ignatius Catholic Church, “After attacking the church, the invaders descended on the community and razed over 60 houses,” he said.

“The community is on fire and deserted, people are fleeing to neighbouring villages hoping to find a safe haven for their families.”

In statement condemning the violent attack the Catholic Diocese of Makurdi confirmed the deaths of priests Joseph Gor and Felix Tylaha.