The 93-year-old president faced calls to step down after nearly four decades in power, but he has refused to resign.

Live Updates
3 minutes ago
…as Zimbabweans head to impeachment venue
Impeachment proceedings have been moved from the Zimbabwean parliament to Harare’s Rainbow Towers Hotel, which has a large conference centre. 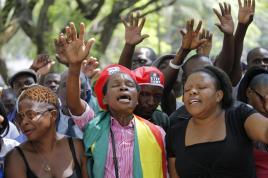 11 minutes ago
Protests outside parliament… 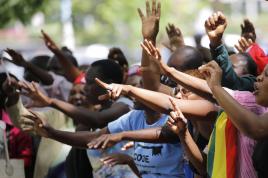 23 minutes ago
‘Let’s throw away the rotten apple’: Motion to impeach is introduced
Parliament is in session at the Rainbow Towers in Harare.
MP Monica Mutsvangwa has introduced her motion to impeach President Robert Mugabe, urging members: “Let’s throw away the rotten apple.”
30 minutes ago
People have been writing their ‘Zimbabwean dream’ on a ‘Citizen’s Manifesto’ at Africa Unity Square
48 minutes ago
Inside the joint sitting of the Senate and National Assembly
The sitting is underway at Rainbow Towers, a journalist shared on social media.
57 minutes ago
En route to the joint sitting of parliament as motion seconded
Zimbabwe’s ruling party has made a motion to impeach President Robert Mugabe and opposition party MDC has seconded it.
Now lawmakers from both houses of Parliament are relocating to a larger venue.
People of Zimbabwe are on the move to the Rainbow Towers hotel and conference centre in Harare for the joint sitting of parliament due to start shortly.
There were reports that the Parliament of Zimbabwe was too small to hold everyone in attendance at the parliamentary sitting earlier on Tuesday. Zimbabwean law says a joint sitting can take place anywhere.
1 hour ago
Summit expresses ‘great concern’ over the political situation in Zimbabwe
A journalist has shared a statement released after a summit of the Southern African Development Community.
The Summit “noted with great concern the unfolding political situation in the Republic of Zimbabwe”, they wrote as they said President Zuma and Mr Lourenco were due to travel to the country.
1 hour ago
South African and Angolan leaders to visit Zimbabwe on Wednesday
South African President Jacob Zuma and his Angolan counterpart, Joao Lourenco, will travel on Wednesday to Zimbabwe, Reuters reported.
1 hour ago
Calls for a ‘democratic Zimbabwe’ as thousands demonstrate
Zimbabwe opposition leader Morgan Tsvangirai told a crowd of thousands outside Parliament that a “democratic Zimbabwe cannot be built by another un-democratic process.”
Mr Tsvangirai said the culture of the ruling party “must end” and everyone must put their heads together and work toward free and fair elections.
Thousands of people demonstrated outside the parliament building on Tuesday, according to a Reuters witness.
2 hours ago
What happens next
The nine-person committee will look at the evidence for impeachment and come back with their recommendations tomorrow or Thursday, Sky News reported.
Both houses will vote again and will need a two-thirds majority to impeach Mugabe.
The process could be slowed as President Robert Mugabe will have the chance to defend himself in hearings, the news channel reported.
2 hours ago
Crowds block the road in front of Parliament as session underway
2 hours ago
2 hours ago
Impeachment proceedings begin
Zimbabwe’s parliament has begun impeachment proceedings against Mugabe.
A joint sitting of the senate and lower house will start at 4.30pm local time at Rainbow Towers Hotel on Tuesday.
There will be a nine person committee appointed to “investigate the removal of President”, said speaker of the National Assembly Jacob Mudenda, according to reports on Twitter.
2 hours ago
‘Full house in Parliament’
Image shared from inside the Parliament of Zimbabwe shows a packed room.
2 hours ago
Parliament speaker says officers received notice to remove Mugabe
Zimbabwe’s parliament speaker has said presiding officers have received a notice to remove President Robert Mugabe.
The parliament speaker in Harare said war veteran leader Chris Mutsvangwa moved the motion and it was seconded by opposition legislator James Maridadi.
2 hours ago
Protestors chant “Mugabe got to go” outside Parliament
Zimbabweans are rallying outside Parliament as the ruling party is poised to begin impeachment proceedings against President Robert Mugabe, who is accused of allowing his wife to “usurp” power and of being too old to rule.
“We are here because we want to be part of this very important occasion in the history of this country,” says Harare resident Samuel Wadzai.
Lawmakers have begun arriving at Parliament.
(Reuters)
2 hours ago
MDC says “this is the hour that Mugabe must go”
As officials arrive at Parliament to begin the impeachment process, a spokesperson for opposition party MDC told Reuters reporters: “This is the hour that Mugabe must go.
“We want a free, fair election with a democratically elected government.”
3 hours ago
Botswana president writes open letter to Mugabe
Botswana’s President Ian Khama has written an open letter urging Robert Mugabe to step down as leader of Zimbabwe.
The letter was shared in a series of tweets on the Botswana Government Twitter account.
Mr Khama,who has openly criticised his neighbor in the past, asked the 93-year-old to “be sensitive to the wishes of the people of Zimbabwe and to do the honourable thing by voluntarily relinquishing power.”
3 hours ago
Parliament to convene shortly
Zimbabwe’s parliamentary sitting to begin impeachment proceedings against Mugabe is reportedly due to begin shortly.
3 hours ago
War veterans urge Mugabe to resign
War veteran chief Chris Mutsvangwa urged Zimbabwe to move “forward”, addressing a press conference on Tuesday, according to reports.
Zimbabwean war veterans once again called for President Robert Mugabe to step down.
The head of Zimbabwe’s association of war veterans said he was “impressed” that ministers boycotted the Cabinet meeting, saying: “By and large everybody refused to go,” news24 reported.
Mr Mustvangwa said: “Only by you being vigilant will we not slide back to Grace Mugabe.
“Only by you will we not have an old man hang on to power.
“We will not be asleep at the wheel again as the people of Zimbabwe.”
The chair of the liberation movement again reiterated that the move was not a coup but a “corrective measure”, it was reported.